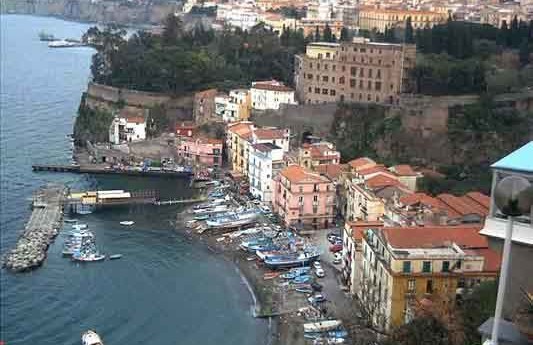 Sorrento is one of the most romantic and famous tourist attractions in Italy. The main fascination of this town is the serene brilliance of its landscape, the flowering of its gardens, the mildness of its air. Many prefer the mild restful beauty of Sorrento, especially for a holiday, to the wild and rugged beauty of Capri, and the orgy of colour and granite of the coast of Amalfi. The town of Sorrento lies on a stratum of rock of volcanic origin about 50 meters above sea level, and has as its background the green hills of Sant’Agata, Tore, S. Angelo and Colli di Fontanelle, which separate the peninsula into the bays of Naples and Salerno.
From Vico Equense to Massalubrense visitor pass behind a curtain of orange trees, with their blossom in May, and silver olive trees.
Among the visitors who came here to enjoy its serenity for their works are: Goethe, Byron, F. Cooper, Walter Scott, Vittorio Alfieri, Giacomo Leopardi, Alexander Dumas, Ernest Renan, Henrik Ibsen, who wrote Ghosts in 1881. Also here were Giuseppe Verdi, and Longfellow in 1862, Samuel Smiles in 1888, Oscar Wilde, Nietzsche wrote Human, too Human in Sorrento in 1876, and it was here that he had his famous dispute with Wagner. Grieg also wrote several of his “poems” here in Sorrento.
The description of this romantic land, with its orange and lemon groves, vineyards, walnut and almond trees, could be attractive, but in real life is definitely better. The song “Come back to Sorrento” is still on for you.
A visitor, who spends his vacation in Sorrento, has the chance to visit also the nearby ruins of Pompeii and Herculaneum and the seaside resorts in the Naples area such as Amalfi, Positano, Capri, Naples itself, Salerno and other beautiful places in the region.

SORRENTO: the town, its history, what to see

The enchanting landscape with its high cliffs, the superb views over the Gulf of Naples over to Vesuvius, make Sorrento a traditional international holiday resort. It is an ideal place to come on holiday, a great tourist attraction also for the vicinity of popular places easy to reach such as the ruins of Pompeii and Herculaneum, Naples, Capri, Positano, Amalfi and Ischia. Sorrento coast is composed of rugged inaccessible cliffs alternated with pleasant beaches. The town’s coastal area is divided in two villages: Marina Piccola, with the harbour for ferries and hydrofoils, and Marina Grande, with its lidos and beaches.

A FEW HISTORICAL INSIGHTS ABOUT SORRENTO :

Sorrento was probably founded by the Etruscans (VII century b.c.), a population coming from Tuscany, and later conquered by the Samnites (V century b.c.), native of Campania region. It eventually came under the Roman sphere influence, but with the fall of the Roman empire and the barbarian invasions, Sorrento suffered the same devastating fate as many other Roman towns in Campania. The town reached the height of its glory in the Middle Ages as a free maritime duchy, and even contested the supremacy of Amalfi and Naples in the Upper Tyrrhenian Sea. After the long period of the Middle Age, Sorrento suffered the Spanish dominion: the baroque style of so many churches is a visible heritage of that period. But the XVIII century and a part of the XIX century were an economical, social end cultural rebirth of Sorrento when the tourist vocation of this area was born and it was established with its inclusion in the so-called “Grand Tour”, a journey through the most important Italian sights that every noble European son of those times had to make to complete his cultural, historical and literary formation. Thus, as above-mentioned, guests such as Byron, Keats, Scott, Dickens, Goethe, Wagner, Ibsen and Nitzsche came to stay in Sorrento in search of sun and inspiration.

WHAT TO SEE IN SORRENTO :

Some places in Sorrento of tourist attraction include:

* Piazza Tasso, formerly called Largo di Castello;
* the Villa Comunale;
* the public garden on the cliff top with a superb view over the Gulf of Naples;
* Marina Grande, a charming bay with a characteristic fishing village;
* the Romanesque style Cathedral dating from the 15th century;
* Regina Giovanna, the archaeological remains of a seaside villa.

Another pearl of the town is the “Correale Museum”, which is due to the munificence of the Correale Counts, who gave this beautiful villa and the park surrounding it as well as the precious collections. The museum has an archeological section on the ground floor, where there Greek, Roman and Byzantine marbles, and in particular the important Base of Augustus (sacrificial altar of a statue of the Augustian age) are kept. In the two upper floors are collections of furniture, paintings, ceramics, clocks, statuettes for Neapolitan cribs and 17th and 18th century Neapolitan porcelain. Various rooms are devoted to the so-called “the School of Posillipo”, with paintings by Pitloo, Vianelli, Duclère, Gigante and some of the most representative painters of the 19th century Naples.
The visit to this museum gives a magnificent idea of the development of Neapolitan decorative arts. Outside the villa, a stone commemorates the illustrious foreigners who have celebrated the beauty of Sorrento.
This town, besides its history, antiquity and healthy climate, is also important for its trade of citrus fruits, wines, oils, walnuts and cheeses (in particular “mozzarella”), as well as for its laceworks, silks and inlaid wood-works, which may be purchased in several shops in Sorrento.
In addition, from Sorrento You can easily reach Punta Campanella, with its beautiful views and seascape from the very tip of the Gulf of Naples and also its relics of historical interest, as well as the towns of Massalubrense and Nerano.