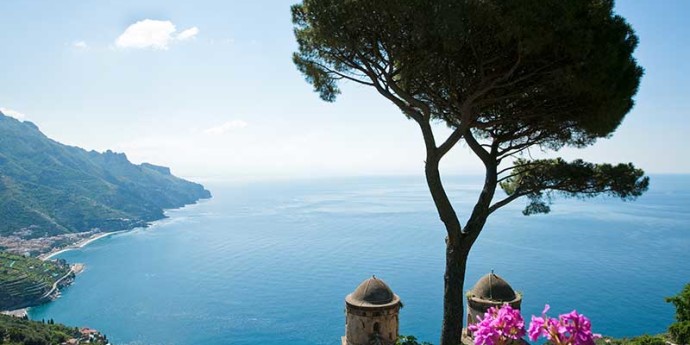 The Amalfi Coast is one of the most exclusive areas in the South of Italy. It has been chosen by writers, film directors and alike for its charm and atmosphere. And at dusk you can find your favorite corner in one of the restaurants along the coast. Positano and Amalfi are linked to Capri, Naples by a regular ferry service and to Sorrento by a public bus.

The Amalfi Coast is considered one of the most beautiful and famous places in Italy. Positano, Amalfi, Ravello, Vietri sul mare, Salerno are precious pearls of the area where it is absolutely gorgeous to go on vacation. The mild climate, the friendly people, the spectacular sceneries, the tasty sea-food strike any tourist.
In addition, from there it is quite easy to reach the other famous places of the area thanks to the National Roads 163 and 145 which take to Sorrento, Pompeii, Naples and so on. During the stay on the Amalfi Coast, travellers can visit the most attractive and famous monuments and places on the riviera such as:
Positano, which is for sure the most charming village on the Amalfi Coast, is the first town tourists meet when they drive from Sorrento to Amalfi. It is exclusive and very quiet: there is only a little road and it does not run down to the beach. All the rest is stairs, some as steep as rung-ladders: when a visitor goes there, he doesn’t walk, but he either climbs up or climbs down.
The Emerald grotto in Conca dei Marini village , is so famous as the Blue grotto of Capri. It can be approached either from the highway, by lift or staircases, or from the sea. This grotto is a fantastic emerald temple, which communicates with the sea through a narrow access below sea level and light, filtering through the water, creates an unreal atmosphere.
The Cathedral of Amalfi, dedicated to St. Andrew, was built in the 12th and 13th centuries. The façade is in Arab-Norman style and the main door, in bronze, was made in Constantinople before 1066. The interior, in Baroque style, is full of works of art and represents the best example of how much importance people of Amalfi gave to the Christian religion. The crypt of the Cathedral keeps the earthly remains of St. Andrew, which arrived in Amalfi in 1208.
The Cathedral of St. Pantaleon in Ravello, dating back to the medieval times, keeps some of the most interesting artistic tresures on the Amalfi Coast: first of all, the bronze doors (12th century) by Barisano da Trani, and then inside the church the magnificent pulpits. Besides, on the left side of the main altar there is the Chapel of St. Pantaleon, the patron saint of the town; there an ampulla contains the blood of the saint, beheaded at Nicomedia on July 27, 290, which liquefies every year on that day.
Villa Rufolo in Ravello, is the place where Richard Wagner composed a part of his Parsifal. In addition, Giovanni Boccaccio wrote a part of his Decameron, and in the fourth story of the second day of this masterpiece he stated: ”Quite close to Salerno there is a coast towering over the sea, that the inhabitants call the Amalfi Coast, full of small villages, gardens and fountains. Among these villages there is one called Ravello”.
Moreover, we suggest You to visit the Cloister of Paradise in Amalfi, the village of Atrani which is the smallest in Italy, Villa Cimbrone in Ravello that has a spectacular sea-view, the towns of Maiori and Minori and so on.
A curiosity: the Amalfi Coast has one of the best lemons in Italy being very big and juicy. In particular, the “sfusato” lemon excels and due to its delicacy it is very sought-after. These fruits are cultivated on pergolas (poles) supporting nets in order to defend the lemon-trees from the wind and the possible hail.